Traits were in Jeff’s mind much earlier than they became part of our design model, influenced by other CCGs like Game of Thrones and Magic:  The Gathering.  Imperial, Solomani, Vilani, Laser, Missile, …

During development, he sprung the idea of them being important on cards for future expansion.  At some point, we needed more varied effects and having traits become more mechanically relevant was a way to find text for either additional cards or to find text for cards where we weren’t happy with the original ideas.

The card I’m going to focus on was not an early card.  Someday, everything will be recorded and humans will have easily hacked audio evidence to everything everyone does, but, not having gotten there yet, I can’t recall how the conversation went that led to …

In an earlier version of Trouble on the Mains (not the playtest name for this set), Irina Tynkova had nothing to do with traits.  We had a playtest version that didn’t have any traits besides Imperial.  She gave a cost reduction for

.  To win all of those Traveller Card Game trivia contests, she also didn’t have

something else back then.  While the original playtest cards for Trouble only had one

and it wasn’t Irina, best I can tell is that Irina was the only

card in the set that had the same name from inception to print.

Probably because I named the card.  I didn’t name a lot of cards, though I often give playtest names for certain card types.  Having a name is useful for informing the art request, which, in turn, is probably going to reinforce the card name.

So, Irina goes from not-

and we drop the cost reduction ability for reasons I don’t recall.  Then, she gains a special based around traits.  And, becomes a Gearhead Mercenary.

Let’s take a look at her special. 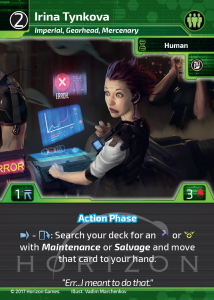 In the awesome TravellerDB, I go search k:maintenance and get five results, four of which are

!  Not exactly shocking that they tend to involve

given, um, Maintenace.  Cold Engines is tech [sic] against piracy – remove RVD Overtuned Thruster Plate.  I mentioned before how I think Glitch could see more play as it does more things than you think.  Well, Irina is the same way, a card I don’t see make a lot of deck lists, yet searching is extremely powerful in CCGs.  Just a Little Longer… is, well, it’s a recursion card for one thing and recursion is extremely powerful in CCGs – sense a theme – and a comboish card just like Glitch … and … and a certain card exists that lets you go get these cards and other cards about to be mentioned.  Redlining having Maintenance amuses me at least.

Then, I search in the DB tool for k:salvage and I get a bunch of results, but I’m looking for

.  First Empire Star Jumper kind of needs to be talked about some other time.  Lost and Found is a common play around these parts due to the desire to not get owned by Neural Guns and Fragmentation Grenades.  But, it’s Kitbash that fits the Irina deck the most.  Get a cheap

out, search out Kitbash, return

back in play, Kitbash it …  So much synergy, almost like Horizon is oozing geniuses (or we are blessed with luck or, more plausibly, combos are a feature of CCGs and cards with similar themes are more likely to combo than ones without similar themes).

Now, just find a card that searches out Gearhead cards and maybe you got a deck.  Of course, when we print a Mercenary searcher, that’s a different deck.

Take a look at the full art.  Pretty cool?