DunDraCon 2019 saw us run four events.  We were encouraged by how much interest there was, even after people started playing.  But, we think we can do better when it comes to the types of decks we use for demos/intros to the Traveller CCG.  There are, of course, aspects to giving demos besides the components, but that can be addressed next time.

While I’ve done many, many customizable card game demos, I still find that they are tricky to get right.  Sure, there’s also that not every game is suited to everyone who tries it.  But, trying to show the essential aspects of a game in a faster paced environment is different from getting together with some friends and trying out a full game leisurely.

We often use Empress Marava and Subsidized Merchant decks for demos these days because we have a bunch on hand.  In the past, we often used Scouts and Beowulfs for similar reasons.  What’s the optimal set of decks for a two-player demo?

Not really any of these.  They often work fine.  Sometimes they don’t.  We can do better when it comes to decks designed not to play a full game to victory but to show core mechanics.  Demos/intros should assume that the demoee doesn’t have enough knowledge to play themselves out of quagmires.  So, while it may occur to me to deep discard and Freelancer a

back and search out Modular Hold and abandon a

and …, that’s not fair to expect in a demo/intro.

The Scout and Beowulf precons have the benefit of including a bunch of early designed cards that are generically useful.  Bwap Advisors, Consultant Call, Calling in a Marker, Freelancer, Just a Little Longer … all fit into a staple category. 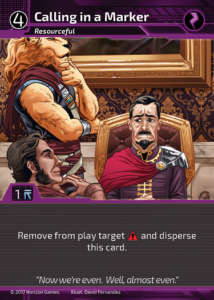 Marava and Merchant don’t include those.  However, they are both better at generating tokens partially due to the

, partially due to how we put together the precons.

Let’s start with thoughts on the trickiest

to work with at the present time:  Type S Scout.  We spent far more time playing Scout against Beowulf when the game was being put together than anything else.  We routinely feel like they match up reasonably well.  With the other

, however, Scout is definitely unusual being both the only

and the only single capability token

Having the Scout chase

while the other ship pursues

the Scout largely ignores can lead to a false impression about the interactivity in the game.

In my demos, the

that has the highest propensity for getting stuck is the Scout.  It’s primarily due to the second feature mentioned above – only generating a single capability token.  A number of

require an additional token and

, which can be frustrating, while it’s not fair to expect a demoee to know to discard heavily until infrastructure is built.

Does this make the Scout a bad demo

?  I think it makes the Scout the least demo oriented

However, it’s not just the

but an area that I could have spent more time focusing on in the last year of running demos.  The Adventure Deck.  The precons are trying to have a range of

.  My lend out decks typically are trying to win in as few rounds as possible, so they go as big as they can and rely on Captain’s Deck cards to power through

.  Neither of those is what an intro game is meant to accomplish.

Even with the Merchant, I run triple capability token

because that’s what I would do in competitive games.  That can get the Merchant stuck when

for an intro game should be EASY.  Single capability token

don’t hang them up too often.  Double capability over triple for the Merchant.

planning for intros.  Our Adventure Cards are rather dense with a variety of features.  This adds complexity to the game but also makes for a more sophisticated game.

Luxury Tax is a great

on cards matter for more than just money.  The

besides the Scout.  The Distance of 4 highlights the impact of having

Contrast with In the Presence of Mine Enemies // Firefight.  The

can be very difficult, the three

capacity can overload an intro deck’s abilities to push through

side is harsh, especially if you were running a Scout with its low

.  While this can stymie even tournament decks, this

is common, points out how

matter for games without Piracy, is a bit easier for the Scout to get through helping to show how the Scout isn’t always at a disadvantage, and is something worth explaining to help with interpreting symbols.  And, the goal isn’t to build decks for demos that can never be stopped, the goal is to prevent situations where the player has to have good knowledge of the game to get unstuck.

Foreign Luxuries // Squabbling Crew may be such a powerhouse in competitive play that it needs to be considered when constructing decks, but it’s easy

requirements, lack of shutting someone down

, and even its potential for a huge payday contribute to a faster demo/intro game. 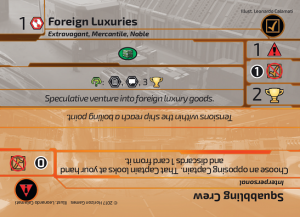 For Captain’s Decks, my lend out decks already tend to play higher proportions of

that either directly deal with

requirements – Consultant Call, Data Mining Expert, Bwap Advisors, Calling in a Marker – or may help with getting past challenges with some setup – Freelancer, Just a Little Longer …

Situational cards, like the event that removes a Transport

, can always be used for money but are questionable in demo decks.  The one benefit to that specific card is pointing out how traits work in the game, but there are other cards that could go in those slots.

are tricky.  On the one hand,

help show how you can slow someone else down and Body Pistol gives a skill.  On the other, I can see a really unpleasant experience if a player gets crew control locked when weapons add on top of the Flints and Vorns of the universe.  I think I’d rather run Tear Gas Canister over Fragmentation Grenade in a demo/intro deck.  While not a

, Gorbash is not a card I think makes for a better demo/intro.  For one thing, there are timing considerations with him, for another just adds to the potential for too much crew control when moving forward is something we want to see in fun games.

are the hardest cards to play with the most restrictions on being able to play them, so I’d lowball this hard.

of each type (more with Beowulf to leverage its ability), and the rest

for a demo/intro deck.  The

will be largely the staples mentioned, plus some ways to help with dealing with Corsair

, e.g. Predatory Tactics (for a Scout demo deck) or even Time is Money, just to give other ways to get through those sorts of

.  I could even see an extreme philosophy just for ease of explaining what to do for a simple Captain’s Deck:  one third

.  This distribution should be a better fit for a straightforward Merchant deck, but the game is such that a player could play decks with more extreme proportions.

Whether my philosophy or your own, we would be happy to see people’s demo/intro deck creations posted to the forums!